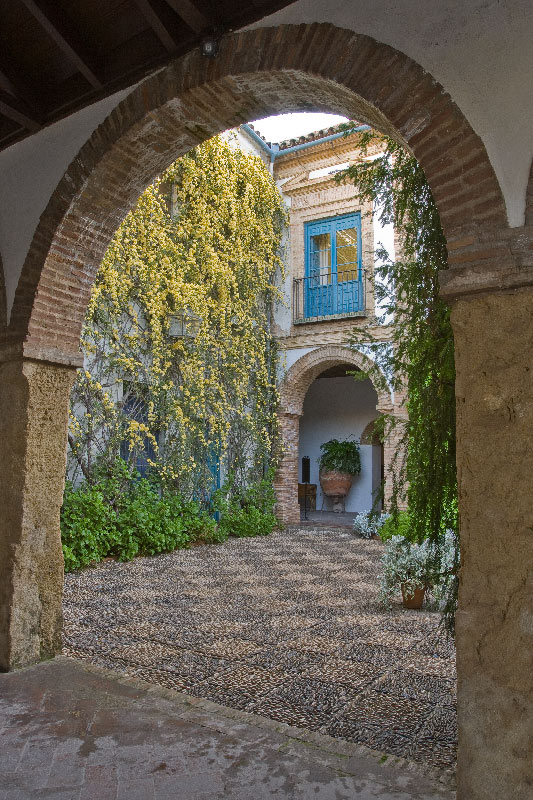 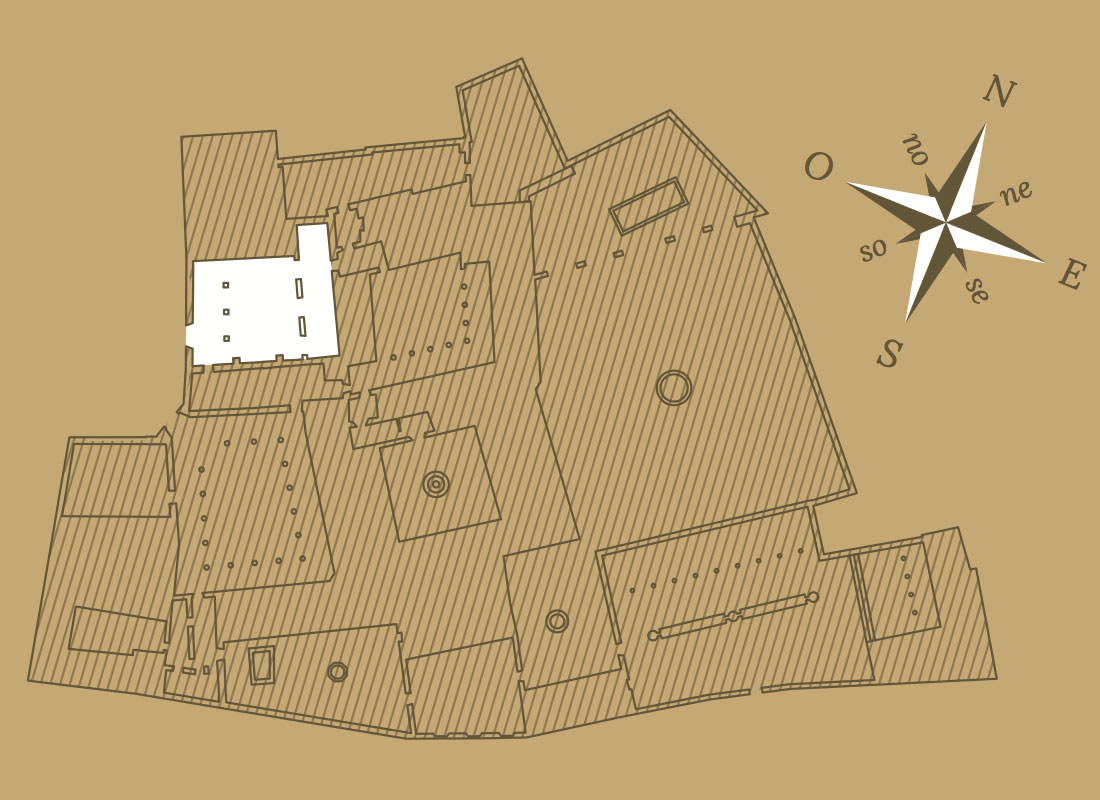 COURTYARD OF THE GATE

This courtyard was the entrance to the houses of Torres Cabrera family until the property was incorporated into Viana in the 19th century. The highlights here are the exposed brickwork walls, the cobbled floor with small stones, the archaeological objects and the old watering trough, today a decorative pillar. This courtyard has inherited the name of the large iron gate that closed off the only wall open to the outside. The stone pillar, today home to maidenhair ferns and umbrella palms, was a drinking trough for horses and other animals. This tells us that at some point this courtyard was the entrance for carriages, with the corresponding stables and grain store. In the 19th century, the Courtyard of the Gate, along with the others adjoining the palace belonging to the Torres Cabrera estate, was purchased by the owners of Viana, and it therefore stopped being used as an entrance courtyard. In the mid-20th century, the 3rd Marquises of Viana, the last residents of the palace, started an extensive remodelling of all the courtyards that had belonged to the house of the Torres Cabrera family, or in other words, the set consisting of the courtyards of the Pool, the Well, the Gardeners, the Chapel and the Gate. The courtyards were decorated with archaeological objects, tiles, various decorative pieces and even fountains, such as the one in the Courtyard of the Gate. The architecture of the Courtyard of the Gate differs significantly from the rest of the courtyards at Viana. The exposed brick walls, the balconies with their beautiful wrought ironwork and wooden “Viana blue” frames, create a colourful sight, reinforced by the cobbled two-coloured flooring, the pillar converted into a flowerpot, the yew growing next to the gate and the wall covered with Lady banks’ rose. The Courtyard of the Gate is currently the entrance to the visitor reception centre at Viana Palace, curiously recovering its use as an entrance courtyard. Courtyard of the gate (…) ¡With such slowness rises up the yew the dark caress of the poison that lives in its branches! Oh, the roses. My yellow roses. Climbing up the lime, tight and strong, their thorns hurting like clipped wings, Here I have never known peace or certainty (…) Life is this patio. Life is this gulp of duality and silence, the suspicion of having arrived late, or perhaps too early to the bar (…) All is well like this: the porcelain, Its yellow garland, this old moulding of panicle and brick, and the brief musk of my soul. Good night. I will serve myself, very well sugared, This infusion of yew. There is a breath of air. Now yes: the gate. Now you can retire. Juana Castro courtyards of poetry (1995) (patios de poesía)