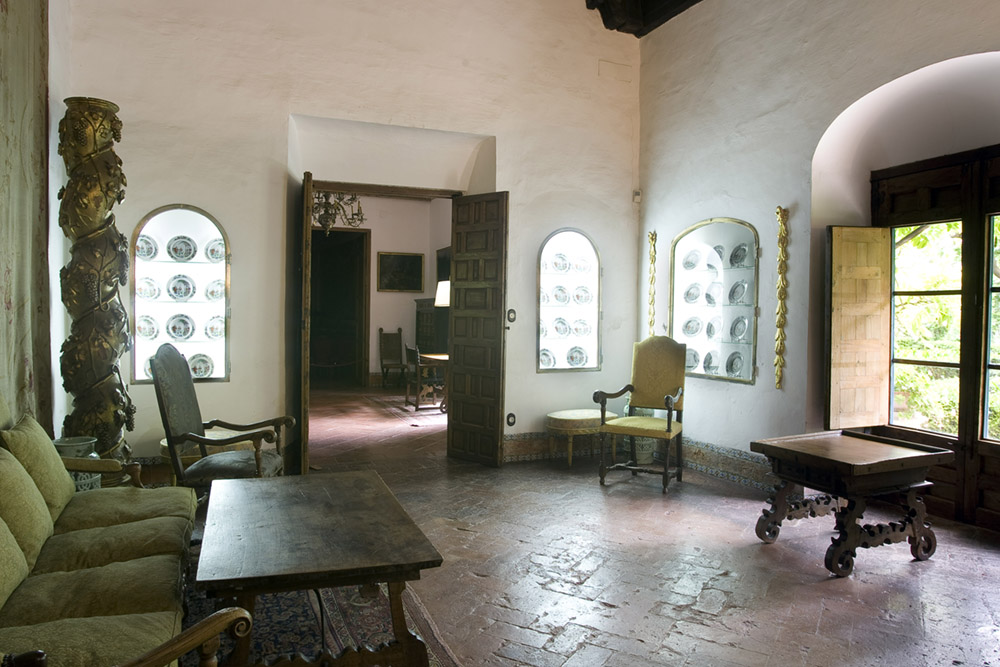 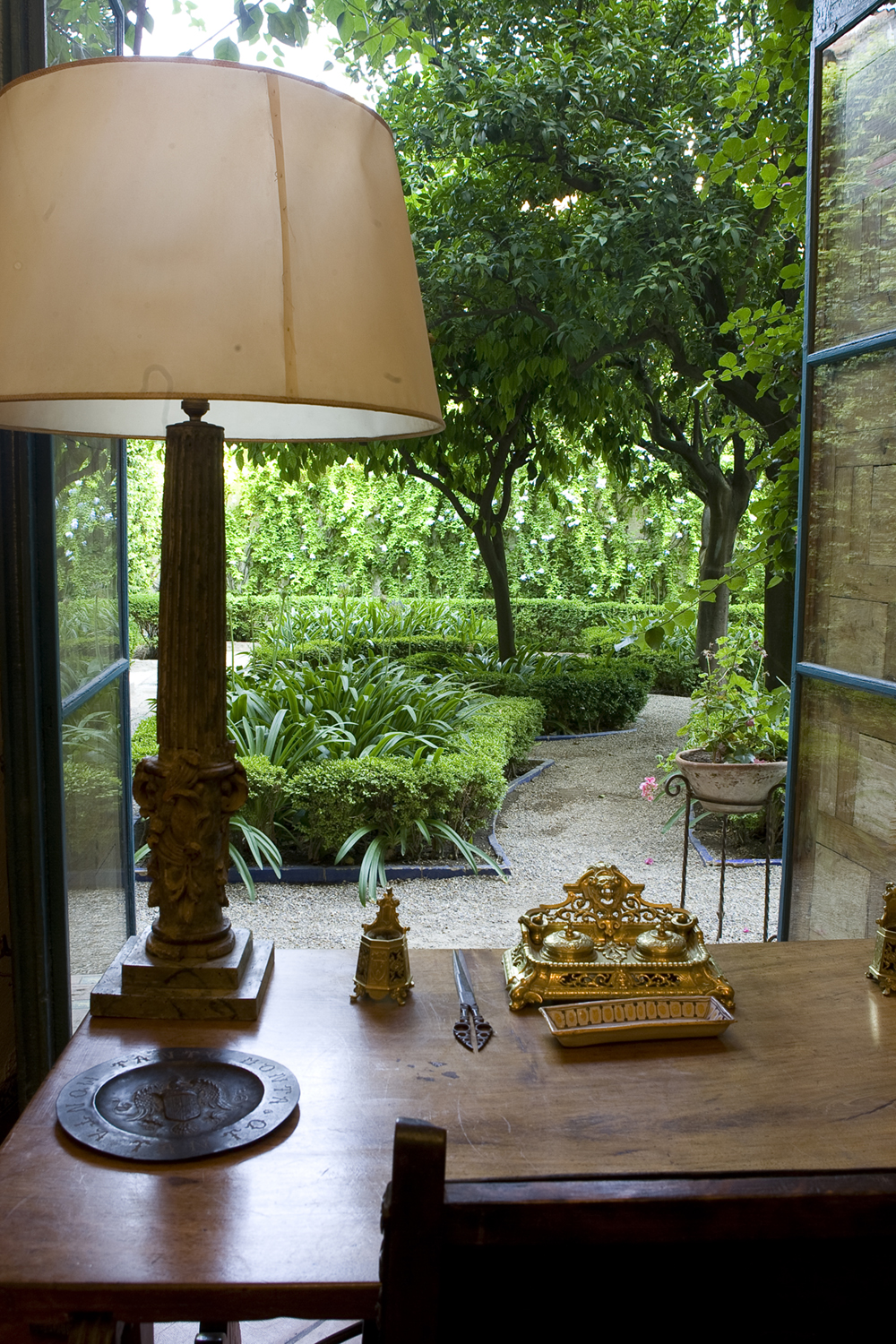 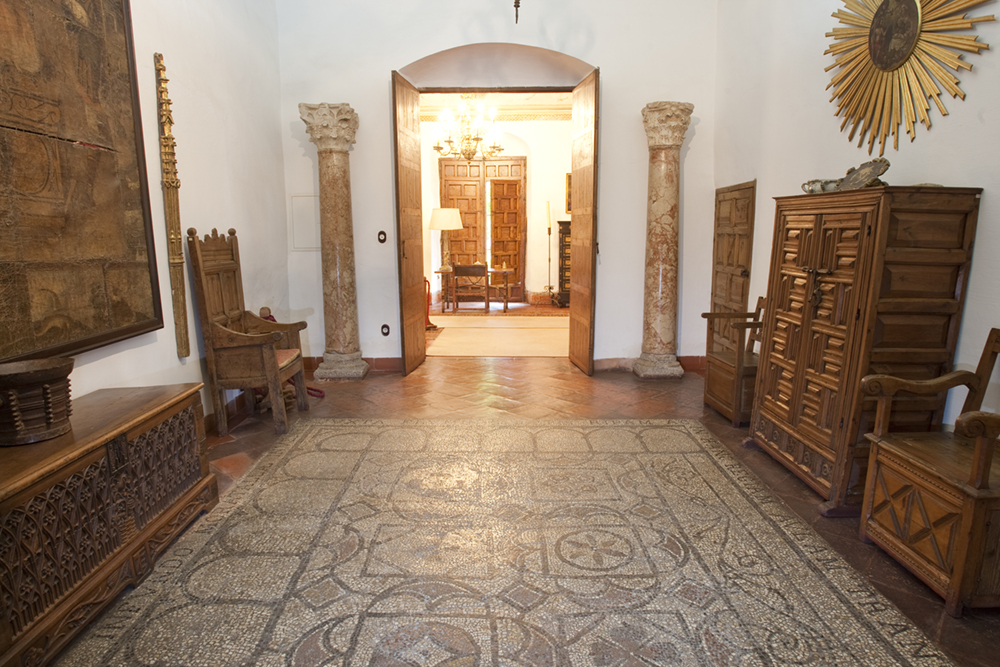 The economic status of the family who lived in the palace was the manor of the nobility. It is a nobility, close to the circles of power, which still retains some foreign luxury compared to the rest of his class, clear setback against the thrust of the new class of the bourgeoisie money. Viana is, therefore, an aristocratic palace and, as such, a symbol of power of its owners, who destined, following the guidelines to use a large area of ​​respect on the ground floor. The main entrance to the house by the call ROOM MOSAIC, which takes the name of the Roman mosaic of the fourth century, appeared in Llanos del Roldán -Palace of Moratalla (Posadas) is done - commanded to bring the II Marquis of Viana, D . José Saavedra and Salamanca in 1923 and being installed in this room, as the inscription that runs along the mosaic. In the center of its encamonada vault, with moldings and rockeries, a votive lamp railing. inside flank the door, two columns of califales bases, with Roman and Visigoth capitals, exponents of the Cordovan archaeological wealth. He stands on one of its walls on leather painting depicting "Cleopatra at the funeral of Marco Antonio", dating from the seventeenth century. After the main entrance, we find the Signature Room. From time immemorial, it is on the table book of signatures of famous visitors. Highlighted in this room decorating your encamonada vault that houses a valance painted festoons and ovals with allegories of Europe, Asia, Africa and America as well as the 6 oils on copper Flemish school, Hieronymus Francken III work. The bronze lamp draft of Dutch type, the nineteenth century is similar to other lamps on the ground floor of the Palace. To the right of this room you can see the so-called ROOM OF CABINETS. Their windows and baroque-rococo wardrobe, show part of a crockery of the East India Company, the eighteenth century, gift S.M. D. Alfonso XIII to II Marquis of Viana, sommelier Corps of the Royal House and other charges. On the pavement, a Persian carpet. To the left of the Signature Room we find the main dining room of the house, also known as TOBIAS ROOM. Its wall paintings, anonymous of s. XVIII and restored in the nineteenth by León Abadia, who added garlands and caryatids, they narrate scenes from the story of Tobias. In the center a convent table late seventeenth century, with the board of one piece of oak. On her oriental porcelain India Company eighteenth century with Imari decoration. Portuguese baroque style seating in embossed leather. The power of the nobility is reflected through this room with the axis created between the courtyard of the Archives and the courtyard of the lattices, the latter from the early seventeenth century, and the only one looking out through its 3 windows. Thus it could be seen from outside the economic and social prestige acquired by the family. Located in the courtyard of the chapel, we found the GALLERY OF SAAVEDRA, which is called the six pictures of the family of Saavedra presented on mostly facing. To highlight the collection of swords and sabers nineteenth century and the white marble head of a Roman emperor of the mid-second century. In the same courtyard is the chapel, which was forwarded by the III Marquise de Viana, Sofia Amelia Lancaster, to what is now the reception. Now relocated in their original place, it is of small proportions. His nineteenth-century altarpiece hosts a painting of a Dolorosa and a carving of a Christ of Humility.