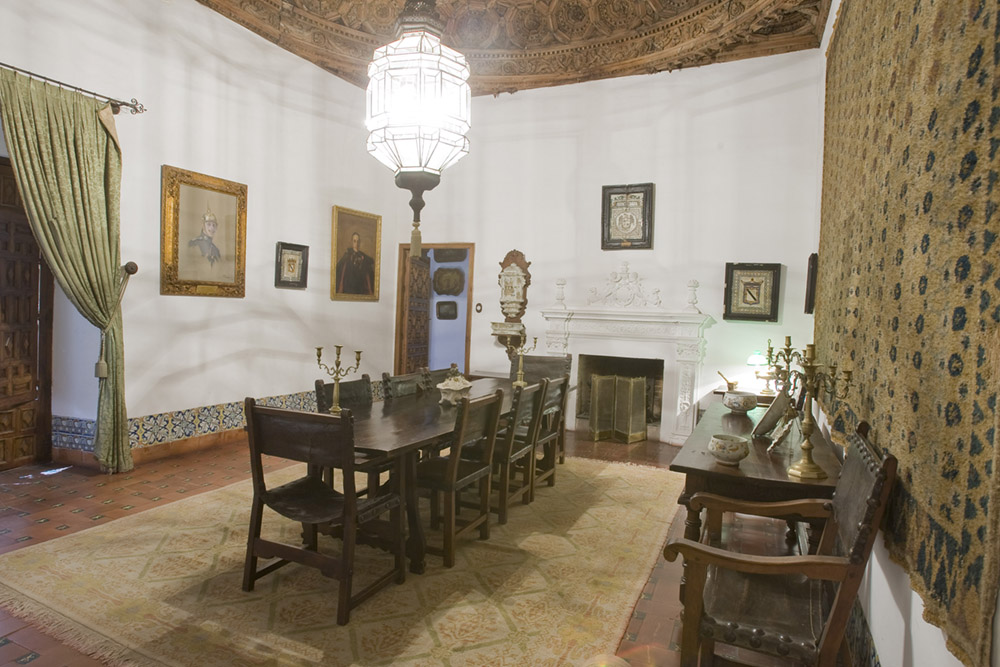 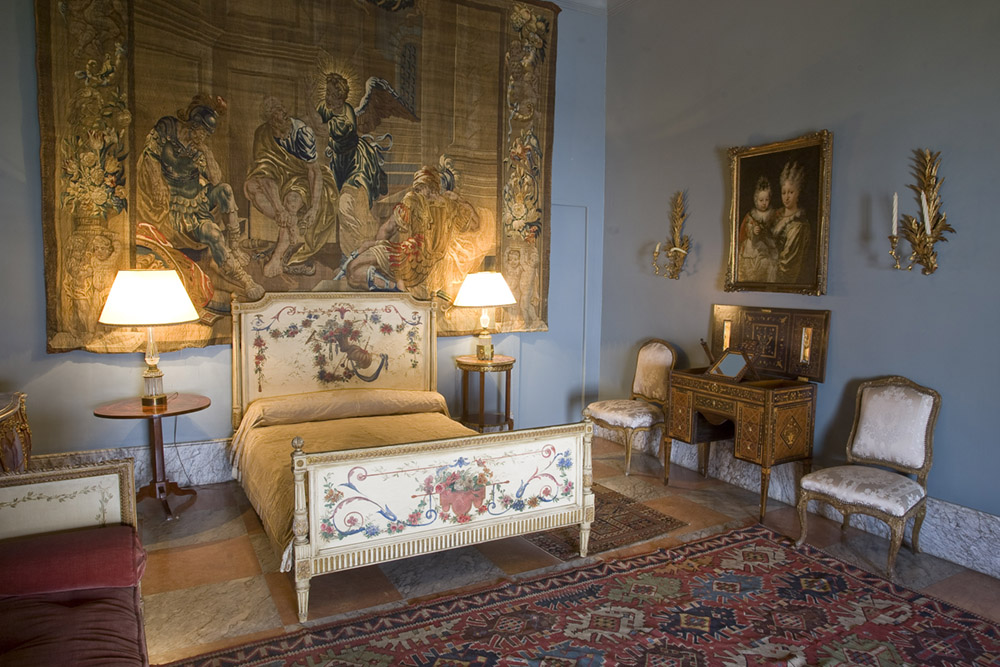 Invited to the palace We are in the part of the house intended for guests. The French atmosphere, as imitated by the Spanish nobility of the eighteenth and nineteenth centuries is present in the decoration of the bedrooms. The first thing we find is the BLACK BEDROOM, named for the glazed floor tiles and the general ambiance of the furniture, in the second half of the nineteenth century, Napoleon III. It is noteworthy furniture decoration with garlands, flowers and landscapes, rich polychrome and gold and pearl details contrasting with the dark tones of the background. Continuing along the gallery that runs along the north patio Receipt, accesses the other guest bedroom, the French bedroom. Here we eighteenth-century French furniture of different styles. Stresses the dresser and on it the portrait of Queen Elizabeth Farnese holding in her arms the future Charles III, the work of Miguel Jacinto Meléndez. Covering the bedroom floor a 'savonnerie Aubusson ". Leaving aside the bedrooms, we enter the elegant atmosphere of the Renaissance and Baroque era through SALOON coffered ceiling. Noteworthy are its sixteenth-century Flemish tapestries with mythological themes and Italian religious painting school and the Spanish court painting ss XVI and XVII works by Bartolome Gonzalez and Pantoja de la Cruz. Its cover is Mudejar style and modern era. Remarkable wooden furniture Louis XIV style upholstery manufacturing Gobelins, the seventeenth century and the baroque tables, of Spanish invoice, most of them decorated with tortoiseshell. Through a small room called the PORTUGUESE HALL house, being decorated with Portuguese baroque furniture of the eighteenth century, where crystal lamp La Granja and the snowy landscape of Flemish school highlights, accedes to the service area. Serving the lords In this part of the house used by the service are the kitchens. CAMPERA in the kitchen, with a marked popular character decoration, highlights the Spanish ceramics and collection jars cristianar Bristol with metallic reflection over the fireplace. In the window, you can see pieces of tableware family porcelain India Company, Old Paris, KPM, Vienna, Meissen ... In the distributor of the following kitchen is a collection of 36 trays of different origins, the eastern predominating. The kitchen is divided into two areas: the cooking area, decorated with different Spanish popular ceramics and metal utensils and washing area, which highlights the sink zinc. The area inhabited by the Marquises The next room we found in the dining room, covered by a magnificent Mannerist paneling, which together with Moorish decorative elements like carpet on the wall, the fifteenth century, contrasting with the popular ceramic Talavera and Alcora eighteenth century. In this room, the figure of King Alfonso XIII, which the II Marquis of Viana was Sommelier Corps, in addition to uniting them a great friendship, as shown in the portrait in which the King wears the uniform of arms II Marquis of Viana is very present dedicated by the King to the Marquis himself. The painting is signed by Joaquin Sorolla in 1908. Next to the dining room is the desk or office of the Marchioness, where the atmosphere of the XVI century is again evident in his Mudejar roof and Baroque shown us through his furniture. Olambrillas in the soil, a rampant golden lion on a green field, also present in the balconies of the exterior, it is the symbol of the Marquis de Viana.